It has been some time since I have posted upon this thread, a damned shame.

Garen, having been a soldier and a combatant for his life, has relied on Military Doctrine for his life. He will not break Doctrine, no matter what.

Doctrine states that if he is with other combatants (non-civilians in a combat situation) then Garen must act as support for aerial combat before dropping into the ground fight. This means Garen is forced to fight and destroy those in the air. Only when a colleague is in danger or the Aerial combatants are impossible to destroy/neutralize then Garen may assist the ground fight while airborne targets. Those on the ground may call for AP Missile strikes.

Coming up soon, one of the most hardcore and ultimate bad ass space Protagonists, a man who is so badass going mentally insane just pisses him off! 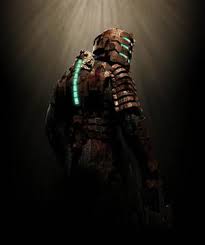 Flamethrower
Blast 4 (Extra: Area (Cone)) (Note: Effect has a range of 20ft and will expand to 5ft)

Wanted: Isaac Clarke is a wanted man by the top people who have plans with the Markers. Isaac has run into multiple people since Dead Space 1 till 2. I think only 2 people in his Dead Space life have actually not wanted to kill or harm in.

Partially Blind: Due to a part in Dead Space 2, Isaac has lost the use of one of his eyes. Nothing happened in game to effect his aim.

Relationship: To prevent Spoilers, I won't name who, but Isaac gets emotionally involved with another person.

This is Isaac Clarke post Dead Space 2. His ability scores are low as he still is only human, and even though he is a stronger, tougher and more athletic human than most others, he is still outclassed in these categories by Necromorphs.

I built Isaac Clarke as a skill/blaster Hybrid, like he is in the games. If I had to assign Issac Clarke a traditional party role, it would be a ranged damage/tank. His equipment really packs a punch and the good part is that Clarke has shown he is capable of working under pressure to invent new stuff. In Dead Space 2, Clarke literally tore out a machines innards, screwed around with it, then shoved it on his arm. It worked!

A major part of Isaac is, like most techy based heroes, his ability to Jury Rig under pressure. This really comes into the fore front in the games as he was busy screwing with a surgical tool as a necromorph in the same frigging room was tearing up the poor patient.

Very impressive!
Is there any chance the older ones will get converted to 3rd? (No idea how much work is involved in that)
Specifically, I really really want my Necrons, but it seems there is not a single 3rd edition build for them, and I'm way too new to M&M to attempt to do it myself
Top

Truth be told I wasn't planning to convert the Necrons, more like Revamp them with the new codex released. I'd also significantly depower them, I think I went a bit over the top. I've noticed that a Necron should be more offensive based.