Please, tell us about your character! This section is custom-made just for your heroes (or villains) to hang out in and strut their stuff.
Locked
157 posts

Complications:
Motivation – Heroism: After a lifetime as a petty criminal the Falcon became a true hero and always seeks to do what’s right.
Responsibility: Sam sees himself as the protector of the Harlem neighbourhood and people.

For Redwing use the statistics for a Hawk on page 134 of the Mutants and Masterminds Gamesmasters Guide.
Top

The One Phil wrote:

marcoasalazarm wrote:That robot that was made to take on Cap if he ever went rogue back in the 40's (and then was deployed later on). Can't remember the name.... "bessie" or something.

And some Coulson, too, plz.

You really might need to help me with that... A google search for "Bessie Marvel" turns up a character called Hellcow (and I'm pretty sure that's not who you mean).

Coulson on the other hand... Complications:
Motivation – Mercenary: Although he maintains a position as the Red Skull’s “number one flunky”, Crossbones will happily work for anyone offering a big enough paycheck.
Enemy: Captain America, Diamondback

Brock Rumlow is a mercenary most often in the employ of the Red Skull, and as such that makes him a frequent and nasty foe of Captain America. Although he doesn't have any powers Crossbones is a brutal fighter and more than capable of matching vigilante style characters in a fight (he'd make a decent opponent for the members of the Batman Family in DC). Crossbones also has a history with former Cap main squeeze Diamondback.

New Combat Advantage - Eye Gouge You are dirty fighter and can opt not to do damage in unarmed melee combat, instead targeting your opponent’s eyes and leaving him blind. The target makes a Fortitude roll against DC 10 + your strength damage bonus. One success leaves your opponent’s vision impared, vision is disabled at two degrees. A third degree failure means vision is unaware.
Top 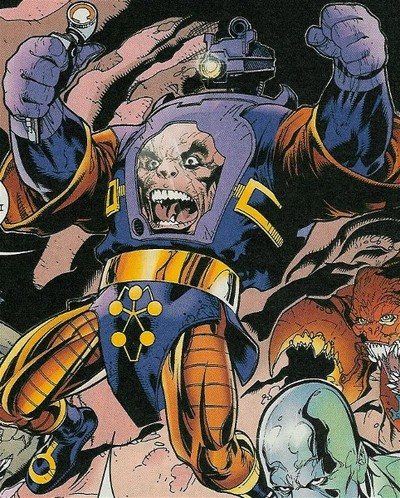 Complications:
Motivation – Unethical Science: Zola is willing to work for anyone who funds his creations and experiments because he loves the thrill of science without limits.
Enemy: Captain America.

Arnim Zola is generally a typical evil scientist type, no great physical threat but good for plotting and unleashing his nasty creations on the world.

I loved how they handled Zola in Captain America: The Winter Soldier. It fit the Marvel Cinematic vision perfectly while the design nodded beautifully to the comics version. I don;t want to say more than that because it would be poor form to spoil things.

Below are game statistics for some of Zola's comic book creations, the Bio-Servants, Doughboy, and Primus.

Complications:
Motivation – Serve: The Bio-Servants are created to serve the needs of Arnim Zola

Zola’s primary servitors are his Bio-Servants, artificial lifeforms that carry out his will and are easily controlled by him. This statistic block represents the basic Bio-Servant. The GM can feel free to adjust these stats to provide a challenge for the heroes. Other servants can be created using the archetypes in the Heroes Handbook and Gamesmaster’s Guide.

Doughboy is a huge, almost pie-shaped bio-creation that is one of Zola’s proudest and most dangerous creations, despite his gentle seeming name. Although functionally without his own will, Doughboy exists to serve Zola. His semi-corporeal tar like form is extremely durable, as well as being sticky to the touch.

Complications:
Motivation – Freedom: Primus started out as another of Zola’s slaves but achieved autonomy and now guards it.
Sucker for a Pretty Face: Primus falls in love at first sight with attractive women and will attack others to possess them.

While Zola has created perhaps more powerful androids only Primus has been created with intelligence and self-actualisation. Primus actually took control of Doughboy, effectively stealing him from Zola, and has clashed with a number of heroes including Captain America and the New Warriors. Primus is made of the same malleable material as Doughboy allowing him to become malleable or rock-solid. Complications:
Motivation – Mercenary: Batroc is in it for the money, nothing more and nothing less.
Honourable: For all he’s a mercenary criminal Batroc has a twisted sense of honour which leads to him treating foes with respect.

Georges Batroc is a long standing enemy of Captain America, debuting early on in Cap's Silver Age return (way back in 1966) and still going to this day. Batroc is a mercenary and former French Foreign Legionnaire and is a fairly hardcore combatant able to take Cap on for a while in a fair fight.

Batroc was actually a pretty early build for me in 3E and he's sat about as a PL9 for all this time. When I revisited him for this thread the PL9 didn't sit right for the simple reason that this guy can actually knock the snot out of a super-soldier... at least for a bit. In DC he'd be beating up guys like Batman and Nightwing as well so PL10 seemed a better fit.

He's given a very cool makeover in the new Captain America movie with a buzz cut and without the goofy moustache. MMA fighter George St Pierre doesn't have the charisma of the comics taunting blowhard but he nails the physical stuff.
Top 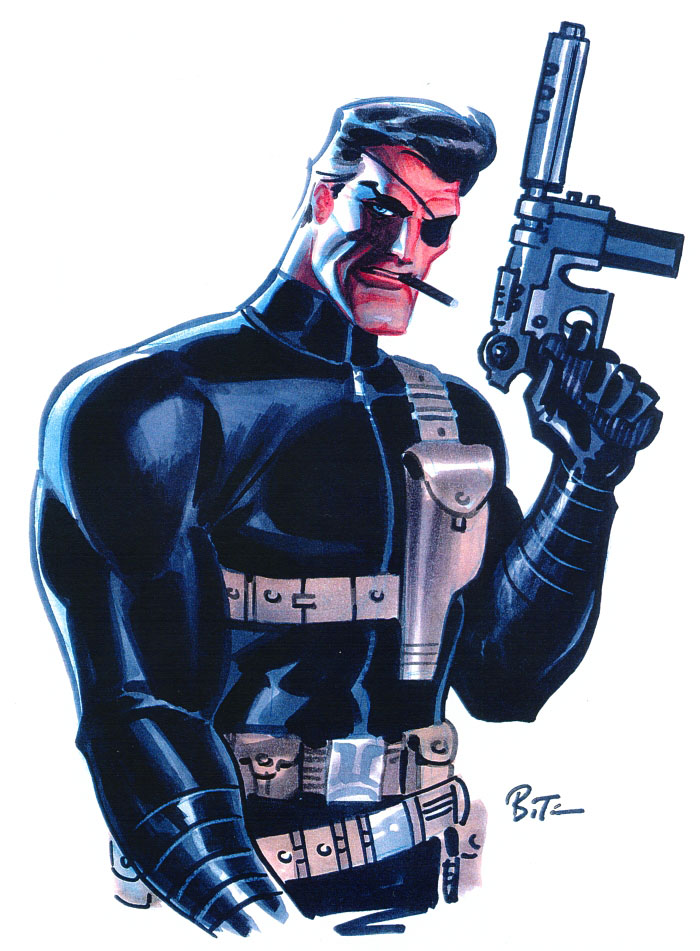 Equipment:
When Nick Fury is the Director of S.H.I.E.L.D. he has access to resources well outside the reach of most people in the Marvel Universe. He can call upon hundreds of elite agents and has access to phenomenal amounts of specialised equipment - which can easily make him the equal of any super villains (or heroes for that matter).
S.H.I.E.L.D. Uniform: Protection 3, Immunity 15 (Ballistic Attacks Limited to Half Effect, Heat Attacks) • 13ep
Personalised Needle Gun: Ranged Multiattack Damage 4, Feature 1 (Can Only be used by Fury), Improved Critical 2 • 14ep

Complications:
Motivation – Responsibility: Fury is a patriot who believes he must sometimes make hard choices in order to do the right thing.
Disability: Fury has only one eye. Over the years he has learned to compensate and suffers no penalties relating to depth perception. However he remains easier to blindside.
Enemies: Baron Strucker, HYDRA, A.I.M.

The "Spy's Spy", Fury is a military man turned head of the world's largest espionage organisation. His role in the Marvel Universe is to be the guy who will make the 'hard choices' and occasionally blow up a country while nominally being a hero.

Fury is almost entirely Power Level 9 across the board, let down only slightly on defence. He's smart enough to let superhuman cat's paws do his fighting for him against other super humans, but against norms he's exceptionally elite.
Top

Complications:
Motivation – Contrition: Barnes seeks to atone for man crimes commited throughout his long life.
Enemies: Barnes is a frequent thorn in the side of the Red Skull as well as AIM.
Guilt: Barnes has been a stone cold killer in the past and feels tremendous guilt over this. Additionally, the sins of his past are more than ready to return to haunt him.
Reputation: Barnes struggles to be accepted by the heroic community due to his own cynical nature and people’s awareness of his past.

There used to be a saying about comic books that no-one stays dead except Uncle Ben and Bucky. Then they brought Bucky back. Not only that, but they retconned him so that while Cap thought he was a nice kid throughout WWII, he was in fact a badass black ops expert who did the network that Cap wouldn't be up for.

He's a skilled fighter and assassin-agent type character who can go toe to toe with Cap and other hero and villain types. His cybernetic arm gives him an advantage over non-powered types as well.

For his time as Captain America just add the shield from my Cap build. It doesn't change him from a PL11 since defence is currently the area he's softest on... the shield will just bring him to his caps.
Top
Locked
157 posts