Please, tell us about your character! This section is custom-made just for your heroes (or villains) to hang out in and strut their stuff.
Locked
157 posts 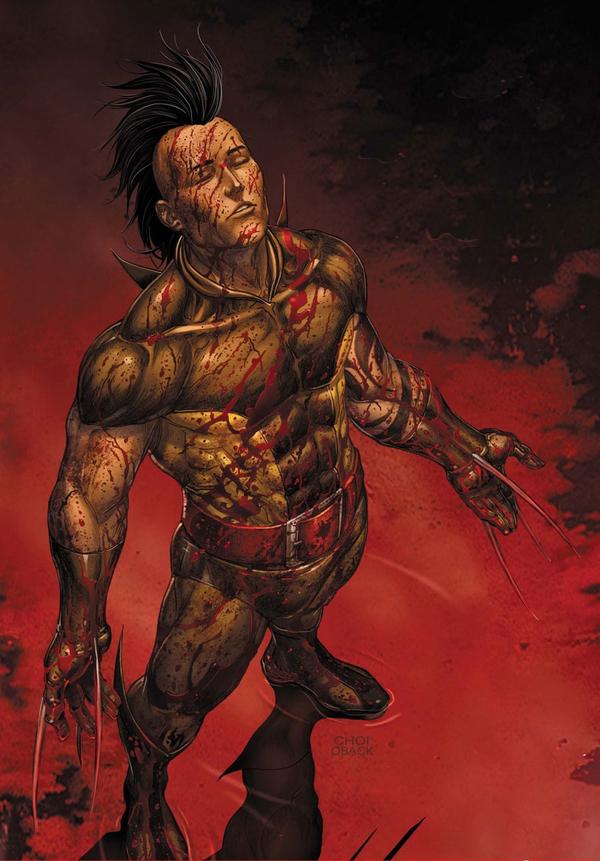 Complications:
Motivation – Selfishness: Like his father, Daken is a lone wolf but he has turned that individuality into a sense of selfishness and self-aggrandisement which seems him treat others as expendable playthings.
Enemy: Daken hates his father Wolverine.
Temper: Another inherited trait is Daken’s immense berserker rages.

When you're running out of ideas for a character... introduce a long lost child. That's exactly what Marvel did when they brought in Daken - a sociopathic adult son for Logan.

Daken has the standard Wolverine power-set, but with no adamantium. Instead he has an extra mutant power which allows him to create pheromones that either render others off balance and vulnerable or else let him affect emotions. As one of the few openly bisexual characters in mainstream comics he uses this ability to seduce men and women alike - which has some really disturbingly rapey connotations.

Daken's not as experienced as his father and lacks decades of black ops training meaning that while still a very dangerous opponent he's not really 100% in Logan's league.
Top

Complications:
Motivation – Mercenary: Bloodscream sees himself as a gentleman assassin for hire.
Obsession: Bloodscream can only be cured of his unending thirst for life forces by a ritual using the blood of another immortal and he is determined to find such a being.
Power Loss: Bloodscream states that no metal forged by man can harm him, and this seems somewhat true as any blade that has been forged by beings other than mortals, such as the Honor Sword of the Yashida Clan which is said to have been forged by demons, can bypass his immunity to metal as well as his Vampiric Toughness. This weakness may be entirely psychological, or it may be tied to the ritual that gave him his powers. Additionally, Bloodscream must regularly drain the life force of others in order to retain access to his other powers.

As a Spaniard on an early expedition to the New World the man who would become Bloodscream was almost killed before a Native American shaman saved his life - but in doing so trapped him between life and death.

Vampires are not unique in super-hero comics, but to present an interesting threat to a hero with metal claws Bloodscream's unique selling point is that he's totally immune to attacks with metal.

He's at the lower end of the power scale for a Wolverine villain, but his powers make him hard for Logan to take down and present a good challenge despite the power level disparity.
Last edited by The One Phil on Sat Mar 01, 2014 3:42 pm, edited 1 time in total.
Top 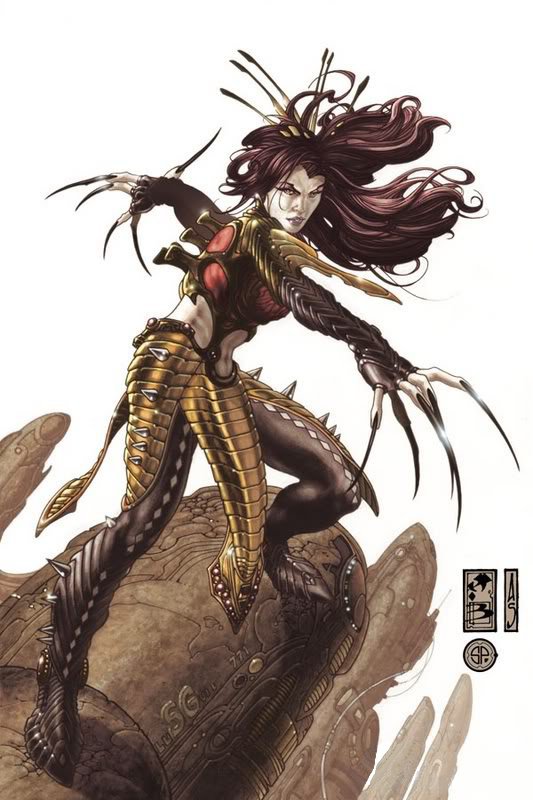 Complications:
Motivation - Vengeance: Deathstrike has a twisted sense of vengeance, especially against Wolverine.
Obsession: Yuriko seeks to be the sole owner of the secret of adamantium bonding.

When Wolverine's lovers aren't fridged they tend to turn into psychopaths who only want to see him suffer (but still kind of fancy him... Can you tell most comic books are written by men?).

Deathstrike is a pretty standard cyborg, based around Logan's power set with big claws and martial arts skills. In more recent years a nano tech healing factor was added giving her extra bite against him. As things stand though, Deathstrike is pretty vicious, but no real match for Wolverine without a bunch of goons to back her up.
Top 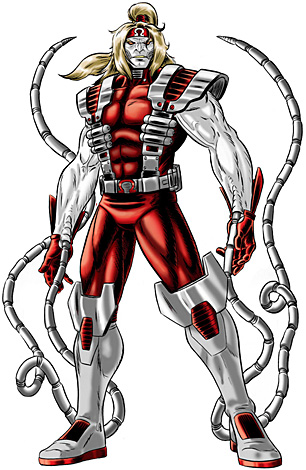 Complications:
Motivation – Greed: Arkady is a criminal and mercenary at heart.
Rival: Competing criminal gangs.
Addiction: Omega Red often requires to drain the life energy of others to undo carbonadium poisoning in his bloodstream.

Another 1990s villain for Wolverine, Omega Red is former Soviet agent who at one point faced off against Logan. He's also a mutant with powers that cause weakness and death, which marries up to his murderous personality.

Carbonadium is another Marvel element, much like adamantium and vibranium, and has the unique effect of inhibiting certain healing factors. Reduce the Regeneration powers of Wolverine, or similar mutants like Daken or Sabretooth, by half when the fall subject to any attack with Omega Red's carbonadium tentacles. They get a hero point too...

Omega Red's tough, and his powers make him a walking dirty bomb, but in reality its only the effect carbonadium has that really makes him a threat to Logan.
Top

Never heard of some of these, Phil, and you actually manage to make them sound interesting. Which is not something I expect from Wolverine's pantheon. Kudos.
Jack of Spades' Builds
Top

Complications:
Motivation – Dominance: Romulus is an ancient predator and like all alpha wolves he seeks to control others like him.
Rivalry: Romulus has a twin sister named Remus who seeks to thwart him and even see him dead.
Obsession: Romulus has an unhealthy fixation on the mutant Wolverine and has a particular need to control his life.

Romulus was introduced as a Big Bad in the Wolverine Origins comic book a few years ago. He's a weird mix of Wolverine and Vandal Savage in that he has apparently been around since the days of pre-history and has been manipulating society behind the scenes. He remained a shadowy figure for the first 40 or so issues of the series before the two eventually had a throw down.

Romulus has the usual Wolverine/Sabretooth/Wild Child power set and has added the obligatory adamantium skeleton since his early appearances. His claws aren't as impressive as some other mutants and he makes up for that with an artificial set (I'm not sure building an array with one effect being removable is strictly legal, but I've gone and done it anyway).

Romulus also has psychic powers which are not terribly impressive. Mutants with atavistic mutations seem to be more susceptible so for guys like Sabretooth and Wolverine it may be worth giving them the Vulnerable Complication against his powers. This would mean he's more effective against them but is also essentially a Hero Point factory.

Despite styling himself as an apex predator Romulus isn't actually all that. He was most effective against Logan when manipulating from the shadows and using Daken as an attack dog. He's actually never really won a fair fight against Wolvie and would probably struggle against Sabretooth as well.
Top

jspade wrote:Never heard of some of these, Phil, and you actually manage to make them sound interesting. Which is not something I expect from Wolverine's pantheon. Kudos.

Thanks, I totally appreciate the compliment.

Ironically, when I came on yesterday the intention was to post New Mutants builds. I saw your thread and realised that would look like I was doing a weird sort of piggybacking so I went for the Wolverine stuff instead. Glad you like these though, Logan's unimaginative variation on a theme rogue's gallery needs some love Complications:
Motivation – Mercenary: The Silver Samurai is a criminal interested in the accrual of wealth and power.
Responsibility: Harada is loyal to Clan Yashida.
Enemy: Wolverine

Despite the last several builds I am no huge fan of Wolverine's rogue's gallery but by Gruumsh do I think that Silver Samurai is the worst of the lot.

As Mariko Yashida was set as Wolverine's 1980s love interest the fact that she was Japanese meant we needed ninjas, and yakuza, and gruumshdamn mutant samurai and so we get The Silver Samurai. His powers are meant to be that he can make his blade cut through anything but in M&M defence wins the all-or-nothing debate so the bast representation is a decent amount of penetrating damage output.

Possibly the most pointless of Logan's foes, he's not a match in accuracy, damage, or any other measure so where does that leave him? He's mostly been Viper's bitch but has been an occasional hero (as part of Japanese hero team Big Hero 6). His whole schtick for Wolverine is that he keeps dragging him back to Clan Yashida politics and by extension the ghost of Mariko as well as the legacy that is Amiko. Its a pretty poor excuse for an 'arch-villain'.
Top

Complications:
Motivation – Hunger: The Wendigo is the victim of a cannibal curse and lives as a bestial creature who hungers for flesh.
Power Loss: The Curse of the Wendigo can be transferred from one bearer to another via a mystical rite.
Temper: The Wendigo howls with rage.

So I come to the end of my run of Wolverine villains with what was kind of his first villain as the Hulk, Wolvie and Wendie ended up in a triple threat.

Wendigo is, no pun intended, a beast. Doles out damage and doesn't have many weak points. The man behind the Wendigo is unimportant too... numerous men have been cursed over the years but the essential beast remains the same.
Top

So, next up I'm going to post some builds inspired by Captain America: The Winter Soldier. All I can say is that for those of you in the states getting to see the movie this weekend you're in for a treat...

I might chuck in a few other Cap inspired builds while I'm at it. I'm not a massive expert on his history but if anyone has any Cap related requests now would be a good time!
Top

That robot that was made to take on Cap if he ever went rogue back in the 40's (and then was deployed later on). Can't remember the name.... "bessie" or something.

marcoasalazarm wrote:That robot that was made to take on Cap if he ever went rogue back in the 40's (and then was deployed later on). Can't remember the name.... "bessie" or something.

And some Coulson, too, plz.

You really might need to help me with that... A google search for "Bessie Marvel" turns up a character called Hellcow (and I'm pretty sure that's not who you mean).

Coulson on the other hand...
Top

The One Phil wrote:

The Black Widow I

Complications:
Motivation – Atonement: The Black Widow has a less than ideal past and constantly seeks to make up for her sins.
Relationships: Natasha is prone to entering into complex relationships with both her allies and her enemies.

In my 2E builds Natasha was a decent PL9, street smart, but able to hang with the big boys if necessary. If Black Canary is PL10 however, then so is Black Widow.

People moan about Advantages (or Feats if you will), but I'm a fan. For characters like Black Widow they provide the nuance and flavour. This Natasha is sneaky, deceptive, and oh so sexy... exactly as she should be.

04/04/14 - An update for Black Widow... She was one of the very first characters I built in 3E so she needed a bit of a fiddle. I stand by the original design philosophy, she should be able to fight but she's just as much about the manipulation and subterfuge that's represented by skills as well as advantages.