Please, tell us about your character! This section is custom-made just for your heroes (or villains) to hang out in and strut their stuff.
Locked
685 posts

Thanks for the catch, JD. Its "Mental" and I'll fix that up right away.
GAZbuild
Top

Complications
Enemy: The line starts behind Green Goblin, Venom, Doc Ock, and the Sinister Six and goes around the block.
Motivation: Responsibility: The kind that comes with great power.
Power Loss: Crazy genetic power ray disease mutation blast things hit Spider-Man all the time. When this happens Peter will loss all of spider powers and a bunch of his abilities. Even more commonly his web shooters will run out of fluid or jam up.
Regular Person: Peter Parker is a dude. He's got a job and bills to pay and usually more of the latter than the former. He gets sick and injured and has to deal with that stuff like a regular joe.
Relationship: Mary Jane, Aunt May, Harry Osbourne, Robbie Robinson, Flash Thompson, Betty Brant, Curt Conners, Black Cat, Johnny Storm, and more.
Reputation: Spider-Man: Threat or Menace?
Responsibility: Spider-Man is an Avenger and must help them save the world all the time.
Rivalry: With noted Spider-Hater J Jonah Jameson.
Secret: Spider-Man is really Peter Parker. *Gasp*

Peter Parker was his high school's nerdy outcast loser. The kind of kid with no friends who goes alone to science demonstrations on his own time. At one such demonstration he was bitten by a radioactive spider and gained the powers of a man sized arachnid. After losing the man who raised him to his own selfishness, Peter dedicated his life to using his great power to help people as the Amazing Spider-Man! Spidey has been to distant planets, met cosmic beings, and wielded the Unipower but mostly he sticks to the streets of New York as the most powerful street level hero. He makes PL 11 caps with his saves, his heightened defenses, his invented web shooter attacks, and his augmented instinctual fighting ability. If that's not enough he can get over on his huge stable of baddies with Agile Feint, Taunt, and Invention based devices. As the poster child for having all of the complications ever, he usually has plenty of HP to throw out there as well. And Peter will fight through every damn complication in the book if he has too because he is the Spectacular Spider-Man!
Last edited by Gazman on Wed Oct 10, 2012 10:15 pm, edited 1 time in total.
GAZbuild
Top

Norman Osborn is arguably the big bad of what is possibly the greatest super hero rogue's gallery of all time. This guy started off as just a big jerk, ripping off his business partners and scientific colleagues. But when he tried to make a chemical formula that he took from his old mentor it kicked him up a notch. The so called goblin formula gave Norman enhanced physical attributes and bumped his brain from smart to real genius while also aggravating his narcissism and paranoia all the way to crazy town. Osbourn fixated on a creepy Halloween theme when he set out to become the greatest costumed villain of them all. He quickly ran afoul of Spider-Man and then things got personal. Discovered his true identity and killed his girlfriend personal. The Green Goblin is only PL 10 but he hits caps with all three defense pairings and a wide array of attacks from his goblin glider, goblin costume, or bag of tricks. What's more, he can also knock Spidey down a peg or two with his special spider sense nullifying bombs. Green Goblin is rich, powerful, crazy, dangerous, and has some of the strangest hair ever.

Created an account just to say how much I enjoy your builds, Gaz. Spidey hasn't been stat'ed up in proper-expensive-solo-hero-style since the start of 3e and it's great to see him back. Plus, without a doubt the most killer Goblin build so far!
Top

Wow! Thanks, Uin! I'm glad I made such an impression on you. I think part of the reason you haven't seen a "proper-expensive-solo-hero-style" Spidey since 3E first came out is that all of the other builders did their Spider-Man back then and I'm Johnny Come Lately. But I still really appreciate you taking the time out to register and tell me such nice things.

In other news: I'm kinda stuck on my Doctor Octopus build. I want him to be able to have different arms do different things at the same time. 3E has no Independent Extra.

I could just make each tentacle a minion, but then Doc never beats Spider-Man, he just has his minions do it for him. Which is a small semantic nitpick, but it feels wrong to me. Maybe a dynamic array and some Quickness to represent multitasking outside of combat actions? I'll figure it out at some point.
GAZbuild
Top

You should check out Kerian Valentine's 2E build of Doc. He used the Sidekick feat which I thought was great and made him very formidable. I did the same, but I just copied his mechanic, really. I couldn't think of another good way to simulate the arm's independence. You could just multiattack strike, which is close, but I think the Sidekick/Minion route is better.
Shop J-Mart!

I tried doing Octopus both ways. And I realized two things. First is that it was much simpler and more elegant to have the arms be part of Otto rather than sidekicks he controls. Some of the benefits he gets by wearing them are really hard to explain by way of sidekicks and giving them all their own full set of stats makes for some weirdness. Second thing is that opening sentence came out a lot dirtier than I intended.
GAZbuild
Top

Complications
Arrogance: Doc Ock think his big brain and master plans are so far superior to others that he can underestimate them.
Disability: Without his corrective lenses Doc Ock is rendered extremely light sensitive and nearly blind.
Enemy: Spider-Man, that accursed arachnid.
Motivation: Greed: Doc Ock wants money, power, and recognition.

Dr. Otto Octavius was always smart, pudgy, and weak. He was raised by an overbearing mother and an abusive father into a weird and awkward little scientific genius. When one of his radiation experiment fused the control harness for his remote manipulator arms to his body and mind he went from weird and awkward to crazy and evil. Now this eight limbed science freak is a PL 12 criminal badass. Doc Ock costs PC points and hits caps for active defenses and four different attacks so long he keeps his arms on. Should those arms be taken away, he can still feel them and remote control them from quite a distance, so that daunting. Under the arms he's still a genius with physics, technology, and crime capable of leading the Sinister Syndicate. Ridiculous haircut and glasses aside, Doctor Octopus is one villain who doesn't so much fight Spider-Man as beat him up.
GAZbuild
Top 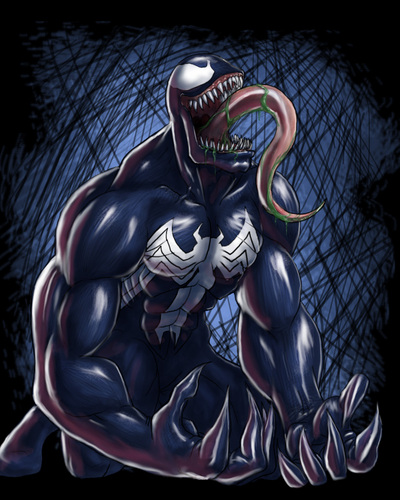 Complications
Hatred: Venom hates Spider-Man, Carnage, all other symbiotes, and anybody who preys on the helpless.
Lethal Protector: Venom has decided that they will protect innocent people and only eat the brains of those who deserve it.
Power Loss: If you take away the alien symbiote from Eddie Brock, both halves of Venom will loose a lot of their power.
Weakness: Since the Venom symbiote comes from deep space it has no defenses against open flames or sonic attacks.

Eddie Brock always wanted to be a hero, but he kinda ended up a liar with a persecution complex. When he lost he job as a journalist, he ended up meeting the alien costume Spider-Man had just rejected. They realized they both were a little bit crazy and had a big hate-on for the webslinger they bonded. At the cellular level. And from that day forth, "We are Venom!". Venom is PL 12 dark reflection of Spidey. He's bulky rather than lanky, black instead of brightly colored, and crazy violent instead of responsible and defensive. Venom also comes with giant slavering fangs to help him reach his caps alongside his active defenses. Venom lacks a little bit of the webhead's speed, agility, and dexterity so some of his stats like ranged combat (PL 10) aren't as high. Despite that, Venom is every bit as expensive as his nemesis and quite capable of sneaking up on people and ripping them in half.
GAZbuild
Top

Thanks, scc! I completely agree. Only Batman's comes close to having the quality and depth of Spider-Man's villain set.

With that in mind, here's another Spidey baddie for street villainy.
GAZbuild
Top

Complications
Enemy: When he's a villain, its Spider-Man. When he's a hero, its Doctor Octopus.
Relationship: Sandman has a young daughter and loves her dearly.
Reputation: Both heroes and villains can by wary of Sandman either for turning delinquent or going soft.
Weakness: As a man of sand, Sandman can be blown away, sloshed to mud, or baked to glass given sufficient wind, water, or heat.

Flint Marko was a petty criminal exposed to radiation on the beach. This added another "dangers of science" villain to Spider-Man's rogue gallery. He was great as a stupid mook with great powers on his own or with the Frightful Four or Sinister Six. Flint would eventually decide to redeem himself by joining up with Silver Sable and even the Avengers, but he'll also slide back down the slope to super crime. Sandman is an overpriced PL 11. He hits caps with some sand attacks, his saves, and his active defenses as long as he shifts his sand to rock hard. An alternate to Protection set up is Insubstantial, so this guy is really hard to hurt. Really really hard to hurt if you consider the fact that his body is always made out of particulate matter and impact attacks do next to nothing to him. Should Sandy be hurt or even killed, he can always reconstitute himself with more sand. Its almost cheating how tough Marko is. A fun power stunt is turning that Sand Control array into Growth and making him even more monstrously badass. Thank god for his crippling vulnerabilities to like 3/4 of the elements.
GAZbuild
Top

Thanks, freeclint! Feel free to take him for a spin. Just let me know how it goes, okay?
GAZbuild
Top

Complications
Enemy: Spider-Man.
Motivation: Greed: Electro is a professional criminal, out for money and power.
Power Loss: Electro needs to charge his powers to keep them at top level. His powers can also be blocked by grounding or insulating him.
Weakness: Electro is vulnerable to shorting out in water and the like. The risk goes up along with his level of power charge.

Max Dillion was a selfish and arrogant man with a secret inferiority complex. He worked as an electrical line repairman until he was struck by lightning while working with some broken high power lines. Since this happened in a comic book, he obviously gained electrical powers. Max has the ability to generate and store electrical power in his body and not enough smarts or willpower to use that ability to the top of his potential for the most part. He ends up a PL 10 for PC points. The only thing Electro hits regularly caps with are his powered attacks. However, he can use he powers to fuel his body with electrical charge to also bump his dodge defense up to caps. His pitiful Will means this mook with powers will never get his saves that high, but he does have ridiculous potential shown in his Extraordinary Effort. And hey turns out that the yellow parts (including the spikes) of Electro's famously bad costume actually help him guide, aim, and channel his powers. The more you know