Please, tell us about your character! This section is custom-made just for your heroes (or villains) to hang out in and strut their stuff.
Locked
17 posts

The Martian Manhunter is my favorite sperhero and one of the most interesting characters to build IMHO.

This thread will contain my builds for him and other green and white Martians in the DC universe and their variations.

Builds are by descending PL.

In this post I list the links to the various great Martian Manhunter builds in the Roll Call forum (in order of author name):

Complications
Alien: He sometimes struggles with adjusting to life on Earth and being the last green Martian (or so he thinks)
Enemy: His brother, Malefic; Human Flame
Power Loss: He loses all (non-innate) powers when exposed to fire
Responsibility: To protect his adopted homeworld (and Mars, but which is only rarely necessary)
Secret Identity: John Jones

Background:
J'onn J'onzz mind was nearly broken in the years after loosing his wife, M'yri'ah, and his daughter, K'hym, whom he loved deeply to the plague Hronmeer's Curse. The plague was engineered by his brother Ma’alefa’ak and not only killed his family, but his whole race, as far as J'onn knew.
J'onn screamed in panic as he was ripped through the space to earth by a machine of a human scientist. The shock helped to reestablish J'onn's sanity, but he could do nothing to save the scientist. His alien appearance and the explosion of the malfunctioning machine was to much for the man's weak heart.
F'onn flew, still confused, and used his telepathy and camouflage to collect information about the inhabitants of this planet. Finally finding a kindred spirit, he was a "Manhunter" on Mars, in the Detective John Jones, he assumed that identity after John's violent death.
Briefly trying his chances as the masked hero "Bronze Wraith", he lives a relative normal life among the earthlings, waiting for a moment to reveal himself and to use his full abilities along similar gifted and thinking individuals.
Last edited by Walking Dad on Mon Jun 03, 2013 1:51 am, edited 1 time in total.
English isn't my native language. Have patience, please. Complications
Alien: He sometimes struggles with adjusting to life on Earth and being the only green Martian there
Motivation: Justice
Power Loss: He loses all powers when exposed to fire
Secret Identity: John Jones, PI

Background:
The Mars is quite similar to Earth and houses its own civilization. Gifted with what would called strange abilities on earth, they live a relatively peaceful life, despite a civil war may decades ago. With their natural abilities there is much less need for technological achievements or a currency. Their natural ability to travel as gas clouds makes transportation technology unneeded, for example.
Justice and peace is holden up by the order of the Manhunters, most akin to Earth's sheriffs and marshals.
J'onn is a member of this ancient order and made just a patrol in gas form, when he encountered a probe from earth. These drones were unmanned and instead controlled by a complex clockwork brain, not able to do more than making flight adjustments and activating the "probing process" once it reaches Mars. Its mission was to gather some ground and air samples and returning with them back to Earth for further analysis.
J'onn's fog form was sucked in and he was unable to change back or flee from the containment.
After the long way home, he was finally released in the Wayne Labs for Planetary Research and Colonization. The scientist, Dr Erdel, died from the shock of seeing him materializing. J'onn flew and got into hiding. The research of Mars was soon given up afterwards.
After fleeing and recognizing that he was stranded on a strange foreign planet, J'onn took some time to adjust and to accept his current situation. He would have to wait until either his people or the earthlings were capable of reaching the Mars/Earth with some regularity. Until then, he would follow his old codex and bring justice to his new home.
English isn't my native language. Have patience, please. Background:
Till'all was one of at least ten White Martian refugees who crash landed on Earth several years ago (due in large part to the machinations of the Green Martian, Cay'an). Like the others, Till'all believed that he was actually of the Green Martian race.
Till'all and his father, Mica'kel, were rescued from captivity by J'onn J'onzz, the Martian Manhunter. J'onzz provided them with a safe house at the abandoned Middleton Estates in Pennsylvania. Till'all was the youngest of the surviving group and was the least embittered by their trials. Till'all attempted to mingle with human society, but as his powers had yet to fully return to him, he accidentally allowed two humans to see his Green Martian form.
Shortly thereafter, Till'all's memories began to return to him and he reverted to his original White Martian appearance. When he learned about the accidental death of his father, Till'all went berserk, blaming J'onzz for his father's demise. After a brief struggle, J'onn managed to calm him down and pledged that he would help keep Till'all safe.
Till'all trained with his adopted uncle J'onn and later with his adopted cousin, Miss Martian. Being more introverted than her, he decided to not join a team or go public at all. Like J'onzz humble beginnings, he decided to act in secret, using his natural ability to become invisible. He tried to avoid the centers of Superhuman population and worked most often in the Southern Hemisphere. He later adopted a variety of superhuman identities, the best known being the Dreamtime Spirit in Australia
Last edited by Walking Dad on Sat Jan 04, 2014 3:30 am, edited 1 time in total.
English isn't my native language. Have patience, please.

Complications:
Enemy: The Martian Manhunter and the Justice League:
Power Loss: Loss of powers and reduction of Str and Sta to 2 when exposed to fire.
Prejudice: Mistrusted even by his peers for being an alien telepath not even from the same dimension.

Background:
(This is the same character seen in Justice League: Crisis on Two Earths, just with a slightly enhanced background)
The Jesters last prank had been nearly the end for J'edd J'arkus as it had been for Angelique. Only by quickly phasing through the ground he had a hope for escaping the blast. Sadly it knocked him still unconscious, floating helpless in the ground. It was much later than his regenerative abilities allowed him to surface. His world was changed. His power base destroyed, Ultraman, Johnny Quick and Owlman dead and President Wilson more confident than ever. Laying low he watched Ultraman and the others escape, but a quick mindread revealed that Ultraman would more likely kill him for "fleeing" the battle than try to join forces again.
Using his mental powers to ensure Erdel's (the man who originally teleported him to earth) help and some stolen secrets from Lex Luthors mind, he managed to escape to the world Luthor had gained help from. After all, now, when the good triumphed in his dimension, it was probably the time for the villains to do here...
Last edited by Walking Dad on Thu Jun 20, 2013 12:22 am, edited 2 times in total.
English isn't my native language. Have patience, please.

Quote: "Once begun, to walk the path, to pursue the prey, to never turn aside, short of death, until justice is done." (Code of the Manhunters) Complications
Motivation (Acceptance): Both to the public, as a new hero and to those who know his true nature, as a sample that not all White Martians are second class beings.
Power Loss: Loss of powers and reduction of Str to 0 and Sta to 1 when exposed to fire.
Secret Identity: Morgan Morse
Prejudice: Miss Martian's true appearance is that of a grotesque monster with white skin, long limbs and a hunchback.


Background:
When she first came to Earth, Miss Martian was a bubbly, exceptionally sweet, polite, and caring, although occasionally shy, "young" Martian girl, who longed to fit in on Earth and be a member of the Team. However, being from Mars and having never really interacted with humans before, she was frequently unfamiliar with Earth customs. She felt especially uncomfortable with her telepathy, as on Mars, it is the prime form of communication. She was also quite inexperienced, and eager to please.

Notes:
Does not include bio-ship and HQ costs.

Although ’s Shapeshifting power is not continuous, consider his green-skinned Martian Lad identity his “normal” form under most circumstances (should he be unable to sustain his Morph effect). The revelation of his true White Martian form should be handled as an aspect of his Prejudice complication. 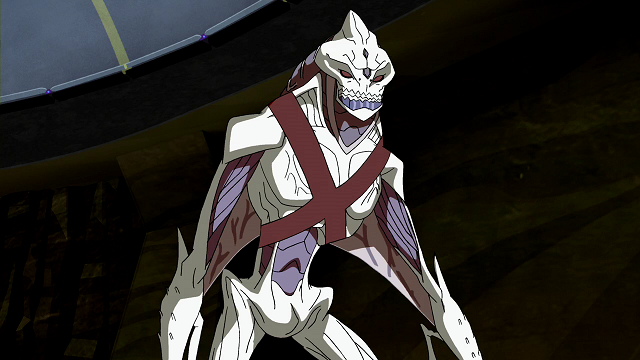 Complications
Get Out of My Head!: The telepathic persona of a dark, ruthless future version of Miss Martian is a constant presence in her mind that she frequently argues with and fights against.
Reputation: Miss Martian is a member of the White Martians. Those who know of the White Martians consider them savage, power-mad and bloodthirsty.
Phobia: Afraid of flames.
Power Loss: She loses all (non-innate) powers when exposed to fire.
English isn't my native language. Have patience, please. 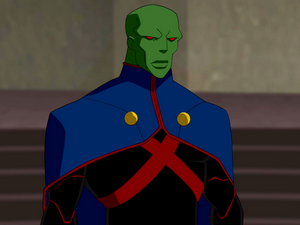 Complications
Motivation (Acceptance): Both to the public, as a new hero and to those who know his true nature, as a sample that not all White Martians are second class beings.
Power Loss: Loss of powers and reduction of Str to 0 and Sta to 1 when exposed to fire.
Secret Identity: Morgan Morse
Prejudice: Miss Martian's true appearance is that of a grotesque monster with white skin, long limbs and a hunchback.
English isn't my native language. Have patience, please.