Please, tell us about your character! This section is custom-made just for your heroes (or villains) to hang out in and strut their stuff.
Locked
800 posts

I've decided to expand this thread to encompass all the builds I've accumulated over the last few years. I've done all the builds listed, but it may take me a while to load them all in.

Atomics, The
It Girl Amorphous started life as a chemical culture in a lab. Originally a computerised plastic medium he achieved self-awareness and escaped. Like Frankenstein's monster he learned about humanity by hiding and spying on them, and also by downloading stuff from the internet. He determined to be a superhero, since he has all sorts of cool things he can do with his mutable form.
Last edited by hs5ias on Wed Nov 27, 2013 2:11 pm, edited 1 time in total.
Top Shiva the Diabolix was created in the alchemical vats of Doctor Azoth to be one of his concubines. The homunculus gained a soul however when a minor demon possessed the body. Fleeing the Doctor the bizarre hybrid creature came to Emerald City. Here she has set herself up as a superhero, using her knowledge of magic and supernatural entities. She summons demons and other, even stranger creatures with which she bargains and manipulates for further knowledge.

Shiva is a superhero because she has little motivation to be a supervillain. Wealth means little to her as her servants can bring her gold and jewels from the elemental planes as she desires. What she really values is her independence. She will not tolerate anyone having any power over her. At the same time she delights in controlling others. She sets her summoned minions to fight supervillains because she finds it amusing and it satisfies her desire to see others subject to her whims. She has no interest in controlling ordinary people, who she sees as dull sheep. Most men for example she can play like puppets without having to exert any of her powers.

Shiva associates with the other superheroes out of a need for security. The one thing she truly fears is Doctor Azoth. With his knowledge of alchemy he could take control of her body, or just destroy it. She wants people around her who have powers the Doctor is unfamiliar with. True to her nature she tries to control them, though she stops short of using her magic. To her chagrin superheroes are an independent minded lot and they have so far resisted being seduced into being her permanent bodyguards.
Last edited by hs5ias on Fri Aug 02, 2013 11:46 am, edited 1 time in total.
Top Nifty ideas. I look forward to seeing more. What personalities/histories would you put with the characters?
Top Icer is a brute, a thug who likes beating people up. He actually comes from a good family and a quite wealthy background but has always been trouble. Since he developed his powers he has found a way to indulge his lust for violence without getting in trouble with the law, by fighting supervillains. In battle he is ruthless, often injuring and even killing his opponents. He is careful though to only use lethal force in situations where it could be justified. The difference between Icer and other superheroes is that to him killing is a valid option. The authorities are aware of his violent nature and there is debate about whether he should be allowed to work as a superhero. Currently he is kept on as they hope to control him for their own ends and fear him going rogue and becoming a supervillain.

Icer controls and generates ice from his body, but cannot do it at a distance. He has to be in physical contact with the ice to control it. This means that he favours fighting in close and he is a skilled brawler. He can attack opponents with sharp masses of ice which spring from him and the ground around him. He has no particular power over cold and his suit is insulated and heated to protect him from the effects of his own powers [This is not entered as a power in his stat block because powers in M&M do not normally harm their user, this feature is just background detail and a complication].
Last edited by hs5ias on Fri Aug 02, 2013 12:01 pm, edited 1 time in total.
Top Nice work, I'd thought about doing something similar since picking that book up.
World of Freedom Setting 3E

"Your ignorance is not my burden."
-- Chiun
Top

Hey, hs5ias. These builds are pretty good. I really like your power set-ups a lot. I guess that power profiles is really working for you.

I just happened to see this series of posts! Cool stuff!

Glad you liked the characters, their art, and Power Profiles!
Best regards, 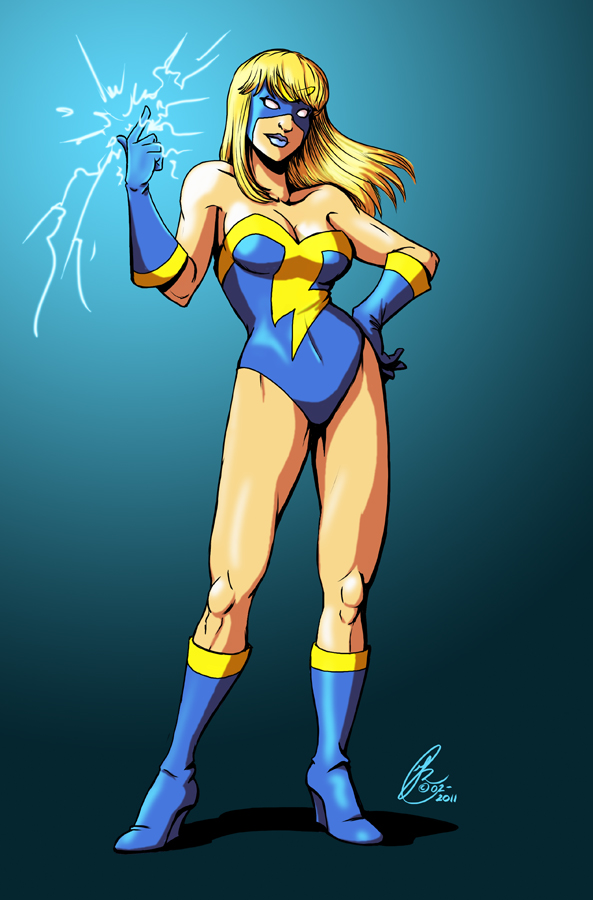 To kick off, one of my favourite webcomic characters, Lightning Lady! Created by webcomic writer and artist Brad Guigar for his now finished webstrip Greystone Inn she went on to become one of the principal characters in its successor Evil Inc..

She's a fairly standard electricity wielder. She's a supervillainess so is a rather domineering, bossy character with a penchant for violent electric shocks to people who annoy her. Despite this she can be very sweet and is loyal to her friends.

The above image is fanart, which I'm going to be using as much as possible since you can see all the original at the sites themselves.
Last edited by hs5ias on Mon Dec 09, 2013 4:31 pm, edited 5 times in total.
Top 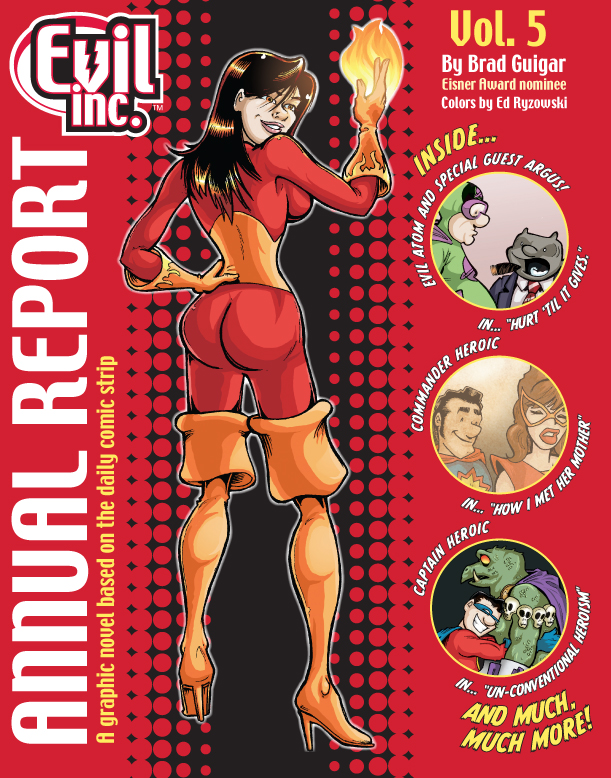 The fire wielder with the punny name, she has the typical character of such. She works as an engineer at Evil Inc. and is responsible for such inventions as the Lightning Lady robot, a robot duplicate of the supervillainess, which rather freaked LL out until she had an idea...
Last edited by hs5ias on Sun Nov 10, 2013 9:50 am, edited 1 time in total.
Top Top hero of the Legion of Justice and resident expy of Superman, Cap is a graphic artist (Brad Guigar's profession) and stay-at-home dad. In character he is more domestic than Clark and more involved with running his superhero team, giving him elements of a sitcom dad and Captain America.
Last edited by hs5ias on Sun Nov 10, 2013 7:19 am, edited 3 times in total.
Top
Locked
800 posts