Dominikos was born in the working class suburb of Acharnes just outside of Athens, Greece. His early life was largely uneventful until September 7, 1999. On that fateful day, Dominikos’ mutant powers manifested themselves. This first explosion of mutant potential revealed itself much to Dominikos’ horror. At first he believed he was having a seizure, but soon he realized that it was not just his body that was shaking, it was the very ground beneath his feat. What Dominikos did not realize, was that he had manifested his powers and those powers caused him to expel powerful waves of vibration. Unfortunately for Dominikos and his countrymen he lived very near a natural fault line. His vibrational powers had caused a terrible earthquake. In the days to follow he was wracked with guilt over the awesome devastation that his powers had wrought. Overall, 143 people lost their lives and more than 2,000 were treated for injuries in what eventually became Greece's deadliest natural disaster in almost half a century. Later, Dominikos would learn that this event took Greek seismologists by surprise as it came from a previously unknown fault, originating in an area that was for a long time considered of a particularly low seismicity. He, of course, knew the true source.

Dominikos sequestered himself away from people until he learned to control his powers. Eventually, Mystique found him and tried to recruit him. At first, Dominikos declined, but his loneliness got the better of him and he agreed to help her. He was initially a reluctant member of her Brotherhood. He refused to use his powers in acts of terrorism, as he still felt guilt over the events of years before. As a result he retired from the Cell to live in peace in Magneto’s mutant society in the Savage Lands. He met a young woman named Amara Aquilla. Despite being over ten years his junior, the two began a relationship based on their similar powers. Dominikos found peace and companionship for the first time in his life.

All of that changed when, in April of 2008, the US government used the Sentinels to attack the Savage Lands. Amara was seriously wounded in the attack and lapsed into a coma. Dominikos was enraged by this and rejoined Mystique’s Cell seeking vengeance for his love. He remains in the Cell, despite his doubts about how Amara would view his actions. Were Amara ever to recover, he would no doubt leave the group behind.
1610 Ultimate Marvel Builds.
Ultimate Marvel Sourcebook.
Third Edition/DC Adventures to Second Edition Conversion.
Top

Notes: Shang Chi has on at least one occasion caught a bullet. This is not a power, but IMO was just a clever description of using a hero point to negate damage.

Thank you Libra. I always love to see your compliments on my threads and others'. Your are kind to take time to do them!
1610 Ultimate Marvel Builds.
Ultimate Marvel Sourcebook.
Third Edition/DC Adventures to Second Edition Conversion.
Top

Mystique was the former lover of Charles Xavier. However, at some point, the young Emma Frost came under the tutelage of Xavier, and shortly after he dumped Mystique for "prissy schoolmarm" Frost. Ever since then, Mystique has held great resentment toward Xavier, which in turn makes her undyingly loyal to Magneto. Mystique leads a small cell of the Brotherhood that handles a variety of missions such as liberating captured mutants, terrorism, and recruitment.

Alison Blaire’s band “Dazzler” is on tour throughout the northeast (or other parts of the US) in March and April of 2009. When they visit the heroes’ town, the fact that the band might include a post human comes to their attention. It also comes to the attention of Mystique and her Brotherhood cell, who tries to recruit her with force if necessary.

The same as above, except an early incarnation of the Friends of Humanity try to assassinate the band. The heroes are caught between the human agents of the F. of H. and Mystique’s Cell.

Instead of trying to recruit Alison, the Cell tries to recruit a local mutant; perhaps even one of the heroes.

A local enemy of the heroes learns of Destiny’s powers and steals one of her journals. The heroes try to recover the journal before the villain can use it for evil purposes. The Cell shows up to try to get the journal back themselves.
1610 Ultimate Marvel Builds.
Ultimate Marvel Sourcebook.
Third Edition/DC Adventures to Second Edition Conversion.
Top 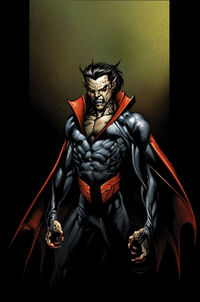 Healing Bite
• Transform 10
– Affects: 1 thing to 1 thing (afflicted to cured)
– Limited (must not have not completed the transformation)
– Range (touch)
– Requires Grapple

Regeneration 5
– Resurrection: Not staked or beheaded 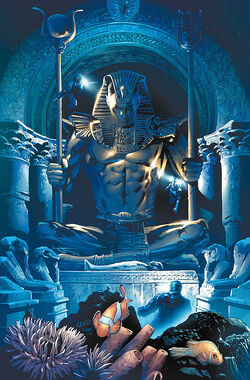 Languages: Any Language studied for more than one hour

Notes: In UFF 26 Namor animates the New York harbor creating a giant creature. I thought about making this a movable move object, but thought it would be more fun if the thing could be a minion. Now it is less a power and more of an encounter in and of itself. The Poseidon-like figure attacks with its trident while his minions, the tentacles, strike out at those in range using the improved grab feat after a successful attack. The following round they grapple again causing the victim to be absorbed and to begin suffocating.


Notes: Namor is basically as strong as my Ultimate Hulk (Before he Hulks-out) and almost as tough. In the 1610 he is near the top of the food chain.
1610 Ultimate Marvel Builds.
Ultimate Marvel Sourcebook.
Third Edition/DC Adventures to Second Edition Conversion.
Top 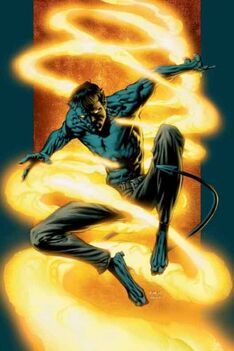 As a result of the Fantastic Four defiling their original homeland, the Attilan race has fled to the dark side of the moon and begun a new society there.

Suddenly Lockjaw and an Inhuman appear in the midst of the heroes. The two are near death and quickly lapse into a coma. The heroes must investigate what has happened on the moon. (Note: The inhuman who has come to earth may awaken with amnesia as to what happened and accompany them back. Any one of the major Inhumans can be used.)

A woman with a young child comes to the heroes for help. She says that someone is after her and her child. The truth is that she had a one night stand with an inhuman on a rare expedition and the Inhumans have discovered the child's existence. The heroes are the only thing that stand between the woman and the Inhumans.

A unstable foreign power has managed to acquire the formula for the Terrigan Mist and is trying to make it safe for use on humans. How did they get it? Is this the work of Maximus? Regardless the heroes have to stop the foreign power from creating a super-powered army.
1610 Ultimate Marvel Builds.
Ultimate Marvel Sourcebook.
Third Edition/DC Adventures to Second Edition Conversion.
Top

The Mutant known as Yunus the Untouchable is a powerful psychic and ally of Magneto. Yunus has the mutant ability to create a psionic force field. His psionic field is far more than a mere physical and psychic defense, as it can be used for mind control and ESP as well as well as other powers.

Yunus began life as a member of the caste called Dalit, Outcaste, or Untouchable. He is an orphan who never knew his parents. He grew up in a Dhakan orphanage where he learned to be cruel and barbarous. When he was a teen he realized he had abilities beyond those of an ordinary man. He used his powers to bully and intimidate those around him. Soon he realized that with power such as he possessed, he could leave the life of the streets behind him. He made his way to deeper into Southeast Asia and eventually to America.

He is a peer of Charles Xavier and Erik Lehnsherr and encountered them in 1998 soon after they had left their wives to create the brotherhood of evil mutants. Since this time he has lived in the savage lands, leaving to assist Magneto on occasion and to advance his own goals.

Yunus is an Indian man of middle age with a weathered face that he owes to years of hard life on the streets and orphanage as a child. When he knows he must fully exert or push his powers or enter combat he regularly paints his face with Hindu mandala-like patterns. He also paints a pattern on his chest. This pattern is one vertical line dissected with three other bent lines representing the arms and feet of Kali. While Yunus’ clothes are of the finest quality, he takes very poor care of them and often appears disheveled and messy.

Yunus is a powerful psychic. His powers all stem from his mutant ability to create a field of psychic energy. Although this most often manifests as a force field, he can also manipulate the field to strengthen his melee attacks. The shield is effective against psychic attacks as well as physical. Further, the psychically produced field can be used as a psychic conduit. Thus he can use it to conduct psychic energy over long distances achieving many effects. Yunus can enclose other’s minds literally and figuratively in his force field controlling their actions and experiencing what they perceive. He can also use communication to project the experiences of a controlled subject into another nearby mind. He has been shown to use this power as a form of communication for Magneto.

Note: Yunus' mainstream counterpart spells his name without the "y" but I changed it as Yunus is a name in the Indian culture.
1610 Ultimate Marvel Builds.
Ultimate Marvel Sourcebook.
Third Edition/DC Adventures to Second Edition Conversion.
Top

Vindicator Battlesuit
• Feature
-Wraith's suit allows him to inject Banshee as a free action. The suit contains six doses before it must be replenished.

Keep up the good work Cinder.