Please, tell us about your character! This section is custom-made just for your heroes (or villains) to hang out in and strut their stuff.
Locked
1314 posts

scc wrote:Cool Chain Devil. I haven't studied your conversion method that close but the results look good. I imagine it could work for Pathfinder too for the most part.

It should work with pathfinder without any problems. Pathfinder is one of my favorite rule systems honestly. Honestly the pathfinder system, should convert a bit more smoothly. The only Issue have strived to maintain, is to convert into M&M without breaking the system what so ever. Or having to come up with new rules , just to handle what is in D&D.

Call my a purist, XD . I prefer a low key fantasy D&D setting as well.
My Links
JD's 3E Thread
Realms of Magnor 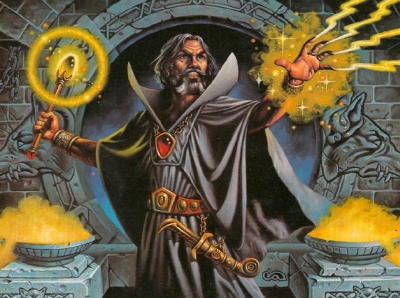 “Do not Interfere in my plans. They are far more reaching then your mind can comprehend.”

Complications:
Nuetrality. Mordenkainen is a severe Nuetralist. But don't get him wrong, he is a schemer of the 1st caliber. He does great works of both good and evil, as long as it does not tip the scales. And as long as it serves his own needs.


Builders/ Charaters Notes:
Mordenkainen often travels disguised as a elderly merchant.
At first, I thought this character might be above pl 20.. But it seems my idea to turn saving throws and skill ranks into a level before putting them into the conversion is a very good idea. Once that was done, it brought him back into the rest of his abilities, which was about PL 17.
Last edited by JoshuaDunlow on Sun Mar 09, 2014 8:09 am, edited 1 time in total.
My Links
JD's 3E Thread
Realms of Magnor

Love that build, JD. I think PL17 fits as well as the Variable Array. I like your take on Knock, too.

One of the most creative uses of Mordenkainen's Disjunction I've seen was that Gilwen, who is one here sometimes, back in the AD&D days had a dragon that BREATHED Mordernkainen's Disjunction so the characters caught in the cone lost all their stuff. Wicked.
Shop J-Mart!

Yeah, I'll leave it up the spell selection to the GM.

I tried to keep it as minimal as possible.
My Links
JD's 3E Thread
Realms of Magnor

Ah. Still, Mordenkainen is plain nasty. Effectively PL 15.5 or so everywhere but in exotic defenses (16.5) and in skills. But man, that Disjunction... In my D&D games (3.5), I was usually saddled with being DM for the group. And my players hated Disjunction. I ruled that you had ro have access to a scroll of it or you couldn't learn the spell (fluffl explanation being the spell was just that rare and incredibly hard to find). Then gave my stories' big bad (a very very old dragon wizard) the scroll, and had the dragon learn the spell.

Indeed he is. It was a great test run of some of my latest conversion thoughts. And was quite happy with how I represented him in M&M. Shall be fun, to hit some of the others in the circle.

Re: Current D&D to M&M Conversions

This update, fixes the skill conversion into M&M. 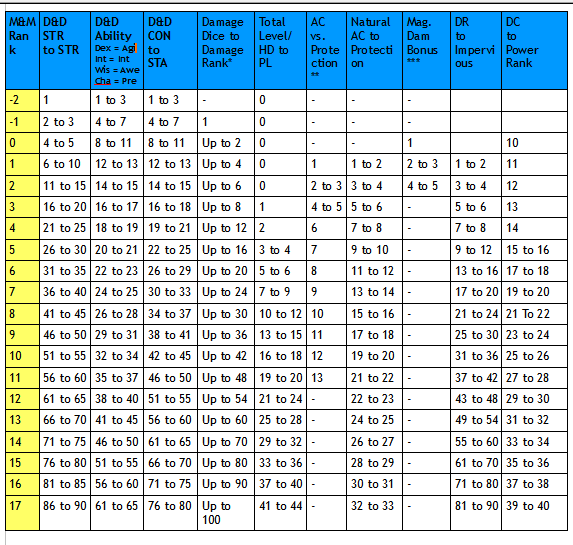 Fighting Score & Ranged Combat: I usually base this off the creatures HD or Base Attack bonus which ever is lower. And I usually assume that their ranged combat, is 2/3rds this value.

Converting Multi Classed Characters: To find the true Hit Dice value before converting. Take your highest level class as your base. Then for every 3 levels in other classes add 1 to this.

Greater HitDice: Some monsters/classes use a D10 or a D12 for their hitdice. To represent their increased potentials. Grant them either Increased Stamina, or the protection power. D10 is 1 rank, D12 is 2 ranks.

Damage Reduction: Use the last column on the chart above for converting into Impervious ratings. I've decided for converting Damage Resistance to specific attacks. Should a monster have a DR of 20 or greater, the GM can opt to just give the creature half save immunities to the specific resistances. DR's of 40 or higher against specific attacks, can be full Immunities. But this is up to you. The main reason to keep there from being incredibly high Impervious ratings.

Skill Ranks: Treat skill ranks like "levels" before converting into Ranks in M&M, than modify that by the characters Ability Modifiers. This will give you the true Modifier of their skills.

Saving Throws to Defense: Since saving throws can get out of hand in D&D in extreme proportions. Ive decided to treat these like "levels" before converting to a rank. This is assumed to be the full defense rating after ability modifiers. Reflexes become Dodge, Will to Will, Fort to Fort. Parry should always be based off the converted characters Fighting score.

Making Spells Generic?: A quick rule, to converting spells. If you don't want to convert a bunch of spells into the game. Do this. The player has an aray of points equal to their caster level x 2. And has a number of spells 1/4th the amount of total spells castable (except for the 0 level spells).

Power / Magic Resistance: For the most part, this is often dropped when converting. Considering that everyone gets a save regardless. I suggest if you want to include some form of resistance from D&D over, try this. Those who have a resistance rating of 20 or higher, Give them a feature, with a +5 save vs. the particular descriptor or a limited impervious defense. . Anything higher consider a 1/2 save Immunity against the particular type. 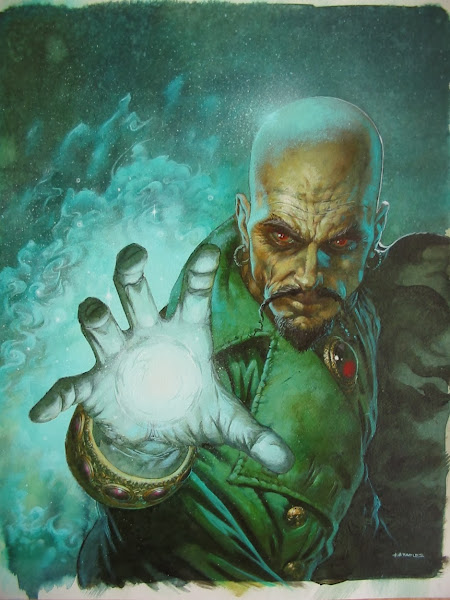 Might I suggest this image from the cover of Mordenkainen's Fantastic Adventure, back before they decided he ought to be a physical double of Ming the Merciless;

Eh. I prefer not-bald Mordenkainwn. He looks more evil with that faux-Ming look, not the neutral schemer he is...
Top

I'll also point out that Mordenkainen with hair actually also looks like a powerful wizard given that most of the artwork of him features him, y'know, doing actual magic.
Narsil 2e
Narsil 3e

Didn't even realize he did look like Ming till you pointed it out. Lol. But your right, i like him with hair too. Think I'll do Bigby next.
My Links
JD's 3E Thread
Realms of Magnor

JoshuaDunlow wrote:Didn't even realize he did look like Ming till you pointed it out.

Once you see it, you cannot un-see it, I suppose.
Narsil 2e
Narsil 3e

'Oil, an emergency? About time the people who run this planet of yours realize that to be dependent upon a mineral slime just doesn't make sense.'
-The Fourth Doctor, Terror of the Zygons
Top
Locked
1314 posts