Damn it! The might of MDsnowmans building skills foiled mine! Well, I thought the Assassin would walk over Domino, because she couldn't even see him. However, in the end, I was bitten in the backside by my own flaws!

What? Am I having a bad hair day?

Can people start suggesting which builds will actually get interest in? I want people to recognize what I make.

Can people start suggesting which builds will actually get interest in? I want people to recognize what I make.

OK, thanks for your help.

Warhammer Fantasy builds would be nice, or maybe WH40K builds. Your Vindicare Assassin was an interesting, and fun looking build.
Top

I want people to recognize what I make.

One thing I love about Inquisitors is the difference of them. Not only are they fighting chaos in different ways, they also have retinues which can be drastically different.

So this is how i'm going to work it.

Born in an Imperial World, Shyle was instantly feared. Her psychic powers were something many people hated, and she didn't help by her gift of expressing Terror and fear. She grew up with her Father, a Lord Militant General in the Imperial Guard. He brought her along as part of the Eighth Gunon Ghouls Regiments camp followers. She quickly became familiar with combat, seeing as there was only war.

Her first real experience was something of an accident. She was visiting her father onboard when an assassin revealed himself. He raised his bolt pistol and was about to open fire, when he noticed he was shivering, his breath condensing. This confused him, and he turned around. He screamed in fear and fouled himself at the sight. A huge, scaly, demon stood in front of him, blood dripping from its teeth. The demon roared, and the assassin cowered in front of it. A loud bang, and the Assassin had committed suicide.

Nobody knew why the Assassin committed suicide, although everybody in the command room the attempt took place felt and odd tingle. What was alarming was Shyle's Dark speech, and the Assassin failing to remove his eyes from hers. A minute after the Assassin killed himself, Shyle fled in distraught. An uproar occurred. Some demanded Tark Shyle resigned from his post for keeping a "foul psyker" with them. Others demanded Tark gave her a rank, a gun, and sent her to join the Ghouls as Psyker capacity.
However, this was unresolved, as an unknown man walked in, and declared himself to be an Inquisitor, holding up the stylish I of the Inquisition.

Shyle was submitted to a Tribunal, and full Psyche and Medical examination. She passed the medical examine easym, but the Psyche examination was a lot more interesting. She had numerous psychic powers, waiting to be developed. The Inquisitor chose to keep Shyle on as an Acolyte. This decision was wise.

Shyle left for active service with the Inquisitor five years after the event, making her 20 when she left. She had saved the Inquisitors life more than once, by terrifying assassins with nought but a glance. She had travelled with the Inquisitor for five years. In that time, she shot dead the Nurgle Cult leader on Garn 5, she caused an Ork Warboss to flee on Hruth 8 and most notably, she assisted in locating a senior authority of a Tau expedition and slaughtered him.

However, the Tau managed to shoot down the Inquisitor. in his last dying breath, he rose Shyle from Acolyte to full blown Inquisitor. She was 26 years old, and she realised she has a life time ahead of her of pain.

Shyle is a beautiful female in her 20's. She has Bum length Blond hair, dyed from the roots, tied in plaits. She wears a shirt leaving her midriff exposed.
She wears tight trousers leading to Platform shoes with eight inch heels. Her lips are death black, and she has a smile on her face that suggests she is a happy individual.

Her Carapace armour is a full body suit of interlocking Carapace plates. She has a Bolt Pistol and its holster slung over her left hip. Her form is easily the hourglass female figure, even in such bulky armour.

Ark Mayers was a Retainer to a very wealthy family on his home Planet of Garn 5. His skills with a Hell pistol were exceptional and his smile never wavering.

Ark was born on Garn 5 with a poor family of orphans. He failed to recieve an education, and barely made it through the slums of Garn 5. In desperation, his family sold themselves as slaves to a rich family, who were keen on slaves. Ark never saw his family again, but he was noted as an exceptional writer, as some of his poems he wrote to pass the time impressed the Noble. So, Ark was kept separate and told to write another poem to impress the lord, which he did.

The noble was shocked by Arks skill, so he did something nobody on the world expected him to do. He adopted Ark as a child, completely reversing Arks life. He went from no education to private tutoring sessions with the Planets best instructors. He went from no money, forced to beg and starve, to the finest meals imported from all over the world. His fame hit a fever pitch. Ark was happy.

When Ark hit 32 years old, he was serving as a Retainer for the nobles when a beautiful woman walked in, with a hooded and cloaked man to the side. Ark had been instructed by his Lord not to admit anybody, but he was intoxicated by her flirting. And also persuaded by the man pulling out a stylized I of the Inquisition. Armed with a Hell pistol the noble himself gave him, and given a carapace suit by the woman, Ark lead them to the Nobles chambers.

Ark was horrified to see the Lord. He was plague ridden, diseased, foul and unclean in every way possible. He leaked green fluid from a belly wound. Ark vomited at the sight, he didn't know his Lord was a Nurgle cultist. A brief fire fight later, the Inquisitor shot down the cultist. Ark was preparing for the worst when the female asked him what he did. Ark told her he was a Retainer. For the second time, he was spared. The woman told him he was now her Retainer, and the male Inquisitor nodded.

The female was Interrogator Shyle, now Inquisitor Shyle. Ark has been with her since. From Garn five, he is the longest serving member of her Retinue. He holds a secret crush on Inquisitor Shyle

Ark is a fairly bland human being. Ark possess short black hair, not even touching his ears, and rough features on his face. His smile is almost fixed on his face. His body is smooth and toned, with a muscular definition. He wears a fine black suit on duty, with Black steel capped boots. He has a holster which holds his Hell pistol in underneath his suit Jacket, but above his white shirt.

Arks Carapace is exactly like Shyle's, only it is wider around the hip area to accomidate his male figure.

Yeal Stud is complete, and is probably an unexpected addition. A mutant to an Inquisitors personal retinue. 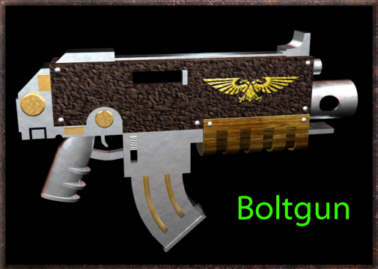 The Mighty Boltgun, symbol of the Emperor! As you can see, it packs a pretty powerful punch compared to the other guns (Which I will be updating.....hopefully)

Two Firing modes. The first one is the simple Bolter Shot. The weapon is semi Automatic, which means it isn't as fast firing as an Autogun or a Lasgun. Is it better? Indeed. The Lasgun fires a simple las beam. The wound, while enough to kill a human man equipped with Flak armour if you hit him in the right places, is virtually non existant if you shoot a marine, or a Necron for example. A boltgun round is an explosive tipped round. It penetrates and explodes inside the body. The round is designed for piercing armour. Hence why I gave it penetration and Disintegration as Feats and Linked Powers.

The Alternate Fire is a hail of Bolter fire. This is pretty much based on my imagination on what happens when you do nothing but unload bolter shells at one spot. The area is basically shredded to bits, most likely along with anything in it. Usual powers, namely Penetration and Disintegration. Your probably thinking, what the hell? Being quite honest, i'm thinking that as well.

Ok. The idea is simple, a bottle of perfume. Inside the bottle is drops that transform a woman into a succubus. The advantage is that your Emotion Control is INSANE! A DC 30 Will check will be extremely hard to resist. It will mean nothing can really harm you. The ultimate set of platform heels out there!

A shiny suit of Latex! What the suit does is unlock the atomic bonds, allowing you to completely remove the bonds between your atoms. The suit melds with the change, allowing you to flow between cracks. In addition, you can suffocate people in Liquid form. Its pretty explanatory.

How about some Necron goodness???