Please, tell us about your character! This section is custom-made just for your heroes (or villains) to hang out in and strut their stuff.
Locked
506 posts

Bugbears resemble hairy, feral goblins standing seven feet tall. They take their name from their noses and claws, which are similar to those of bears. Their claws are not long and sharp enough to be used as weapons, so bugbears often armor and arm themselves with a variety of purloined gear. Most often, this gear is second-rate and in poor repair.

Bugbear eyes are greenish white with red pupils, and their wedge-shaped ears rise from the tops of their heads. Most bugbears have hides ranging from light yellow to yellow brown and their thick, coarse hair ranges from brown to brick red.

Bugbears have exceptional sight and hearing, able to see in pitch darkness. They move with amazing stealth. Unlike their smaller cousins, bugbears operate equally well in daylight and great darkness. A bugbear is considered mature by the age of 11. They live for approximately 75 years.

Bugbears are carnivores who survive primarily by hunting. They will eat anything they can kill, including sentient beings. Intruders are considered a valuable source of food, so bugbears rarely bother to negotiate with them. They have a fondness for glittery, shiny objects and weapons, however, so they will sometimes parley if they think they can get something exceptional. Bugbears also enjoy strong wine and ale, sometimes to excess. Rarely, they will take slaves.

Bugbears live in loose bands. Bands of 24 or more will be led by a chief and a sub-chief. Females are not given the same opportunities as males. Bugbears are less preoccupied with mass battles than most goblinoids, partially because they can't as easily afford the losses, and partially because their chaotic nature makes organizing them in armies difficult.
Last edited by legend on Sun May 06, 2012 8:08 am, edited 6 times in total.
Every published Marvel Super Heroes RPG (FASERIP) character converted to 3E
Amalgam Comics (Marvel/DC mergers)
Basic Fantasy
Ready to Play (PL 10 & 150 points) Universe
Top

A frost giant’s hair can be light blue or dirty yellow, and its eyes usually match its hair color. Frost giants dress in skins and pelts, along with any jewelry they own. Frost giant warriors add chain shirts and metal helmets decorated with horns or feathers. An adult male is about 15 feet tall and weighs about 2,800 pounds. Females are slightly shorter and lighter, but otherwise identical with males. Frost giants can live to be 250 years old.

Frost giants usually start combat at a distance, throwing rocks until they run out of ammunition or the opponent closes, then wading in with their enormous battleaxes. A favorite tactic is to lay an ambush by hiding buried in the snow at the top of an icy or snowy slope, where opponents will have difficulty reaching them.
Last edited by legend on Fri May 04, 2012 5:15 am, edited 10 times in total.
Every published Marvel Super Heroes RPG (FASERIP) character converted to 3E
Amalgam Comics (Marvel/DC mergers)
Basic Fantasy
Ready to Play (PL 10 & 150 points) Universe
Top 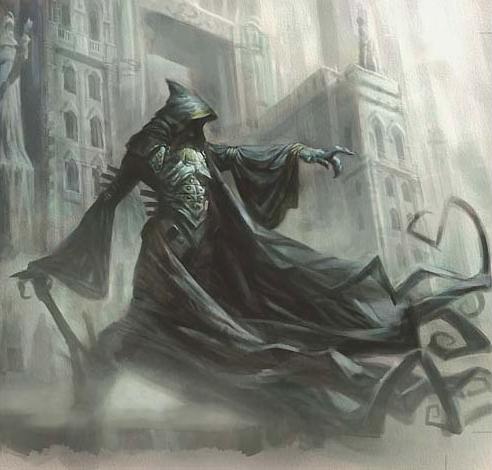 Wraiths are incorporeal creatures born of evil and darkness, despising light and all living things. In some cases, the grim silhouette of a wraith might appear armored or outfitted with weapons. This appearance does not affect the creature’s combat abilities but only reflects the shape it had in life. A wraith drains the life from living creatures, turning them into new wraiths upon death. A wraith is powerless in natural sunlight and will flee from it. A wraith appears as a sinister, spectral figure robed in darkness. It has no visual features or appendages, except for its glowing red eyes.
Last edited by legend on Thu May 10, 2012 2:13 pm, edited 11 times in total.
Every published Marvel Super Heroes RPG (FASERIP) character converted to 3E
Amalgam Comics (Marvel/DC mergers)
Basic Fantasy
Ready to Play (PL 10 & 150 points) Universe
Top

A winter wolf resembles a normal wolf, only with white or another pale color fur. Despite being large (8 feet long and 4 and a half feet tall), it is somewhat more slender and petite than other wolves.

The winter wolf is pretty similar in habits to normal wolves. It hunts either solitary or in packs, in its desolate environment, searching for game. It has a good sense of smell, is stealthy, and is prized for its fur. It is distinguishable from other wolves, including the arctic wolf, however, in that it has a breath weapon; it can breathe ice. This gives it an obvious advantage in combat. It also attacks with its teeth and claws. There is little else which needs to be said about the creature.